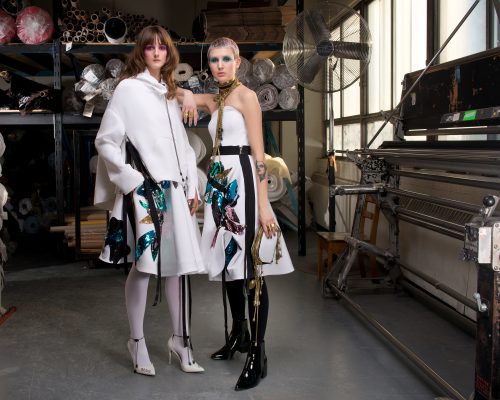 “On June 7th, arsenal contemporary art will present dna of denis gagnon. this event is a one-time opportunity to discover the fascinating universe of this ambitious and mind-blowing designer. for the occasion, he invites us into his imaginary world where emotion runs deep. interview with two passionate men about art, designer denis gagnon and director of arsenal, jean-ftançois bélisle.

Jean-François Bélisle :
It’s been a while that Arsenal wants to get involved into different forms of contemporary art. Either it is between fashion, music or dance, we believe that there are connections to be made and that Montreal has a vivid contemporary art scene. Once as I went to Denis Binet’s salon, I realized that he could be the bond between different artists, based on his reputation and respect people have towards him. At the beginning, we wanted to bring together many designers but then pointed out that to really understand a designer’s DNA, we would have to focus only on one. Undeniably, Denis Gagnon came up first in our mind.

Denis Gagnon :
From the start I was afraid and at the second meeting I didn’t want to do it anymore. It is always time consuming and demands a lot of energy but the great team I work with reassured me. In the end, it was impossible to refuse such an offer.

Stéphane Le Duc : What is Denis Gagnon’s DNA made of?

JFB : There’s always something surprising about Denis. I found it out by looking at his archives and attending his shows. He brings us someplace where no one has been before and I think it’s fascinating. That’s one of the many reasons why we decided to begin this series with Denis Gagnon. He is the ideal candidate. He has a creative power and expresses it through everything he does and even by the way he talks, his attitude or his manners. There are many designers out there that are as interesting as Denis but the only way to learn more about them is by visiting their studio. With Denis, you get what you see.

DG : I realize that I’m the perfect choice (giggles)! It is true that I’m not hiding like other artists. Even though I’m open minded and spontaneous, it is still difficult to talk about myself. We should have a few drinks so that I could really reveal my true self… I’m impulsive and live through my emotions. My work, the things I work with, everything is about emotion. Sometimes I listen to music to make myself cry. I love to cry, I love to laugh, I love to have fun. I have an intense personality. And it is this intensity and my history that will be revealed through this DNA event. Arsenal, an incredible venue, will be filled with all sorts of performers. It is an exhibition hall offering the chance to come across tremendous new art works never seen before in Montreal. I’m very lucky to be at the center of this event which confirms my determination as a designer.”